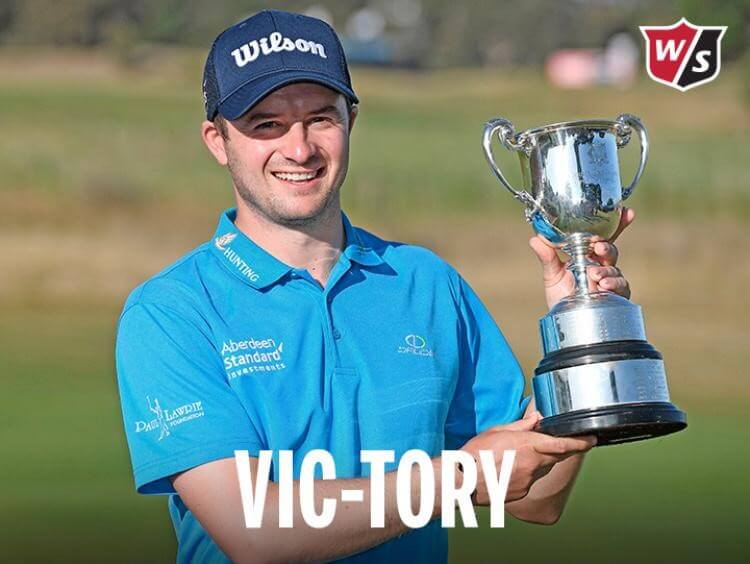 David Law, the Paul Lawrie Golf Centre Touring Professional, took the next big step in his Professional Golf career by produced an incredible finish to overhaul tournament leader Wade Ormsby and win his first European Tour title at the ISPS Handa Vic Open in only his 18th start.

The Scotsman who was three shots back after 15 holes made a fine birdie on the 16th before producing a stunning second shot to eight feet to set up an eagle chance on the par-five 18th.  Rolling in his eagle effort  gave Law a share of the lead with Ormsby at 18 under and when the home favourite made double-bogey on the 17th, he required an eagle at the last to force a play-off.  Ormsby’s approach to 18 left him with a chance for eagle, however he had to settle for a birdie giving Law a 1 shot winning margin.

“It’s massive,” he said. “It’s not something I expected. For me just being out here playing on the European Tour was enough.  “I’ve been loving the four events I’ve played so far and to just be a European Tour player was what I was happy with. To have won today, it sort of changes things a little bit. I’ll go home, reflect a little bit on things and reassess.  He added: “We said we were going to try to finish three-two-four in the hope that we could get a top-three finish.  Then birdie 16, par 17, and going down the last we said we need eagle.  We make eagle, we post at 18 under, you never know what can happen.”

“I never thought it would have happened at the start of today, but I dug in on the back nine. Especially those last three holes, we tried hard to finish really strong.  We just knew on 18 that we were in the hunt.  Until then it was just try to get in position for a top three, top two finish.
“Standing on the 18th fairway we knew making eagle would put pressure on.  Hit a great shot in, it was a nice putt, eight feet down the hill, pretty straight.  You just needed to get it going.  I mean, it was amazing.  I kind of thought I pulled it a little bit and it sneaked in the left edge, it was a relief to see it drop.
“You know, it’s something completely different this week. I’ve never played a tournament like this before.  The fans walk inside the ropes and we play with the women competitors, too.  It’s something completely different, something I’ve really enjoyed this week.”
David now moves on to the next European Tour event the ISPS Handa World Super 6 at Lake Karrinyup Country Club on Australia’s west coast.